Archive for the tag “books”

A Word About Setting and Its Influence on the Story — And a Chance to win a FREE e-copy of TRUE blue! 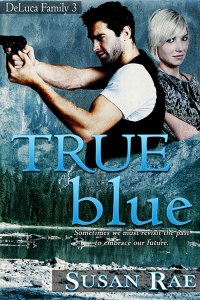 TRUE blue is the third installment of my mystery/suspense series based on a Chicago cop family, the DeLucas. So why, you might ask, is there a picture of a mountain lake and a waterfall on the cover?

Good question. Yes, two thirds of the story in TRUE blue does take place in the streets of Chicago. Chicago is a fascinating city compiled of seventy-seven different neighborhoods that house the poorest of the poor to the richest of the rich and every socioeconomic class in between. Diversity is Chicago’s middle name. The streets are bustling with commerce, culture, and unfortunately in many instances, crime. Given all that, what better place to set a mystery/suspense novel? From the often serene beauty of Lake Michigan and the famous Chicago skyline to the tired apartment complexes of the inner city, Chicago is ripe for stories of personal triumph and despair.

And, for a pair of married detectives, it is filled with cases that need to be solved. But life can be hectic in this bustling city when you are attempting to keep up with your current case load while trying to solve a twenty-four year old murder, deal with the return of a childhood sweetheart, keep a marriage together, and raise a very active three-year old all at the same time. Oh, and then there’s the extended family and all their issues to contend with.  (Read on and leave a comment to automatically be entered to win a free e-book copy of TRUE blue! Drawing for the winner will be on August 3.) END_OF_DOCUMENT_TOKEN_TO_BE_REPLACED

Beta Readers–You’ve got to love them!

Or…What happens when they point out something in your novel that could make it stronger but would require some significant revising just days before your first edits are due back to your editor?

In a perfect world, you would have finished your manuscript and sent it to your Beta readers long before your first edits come back.  Ah yes…in a perfect world. Unfortunately, that doesn’t always happen.

So, what do you do? First of all, you have to believe in your Beta Readers.  For that, you cannot have just anyone as a
Beta Reader. You need people you trust. People who are not going to love anything you write just because you wrote it, but people who read a lot, and read in the genre that you write. They don’t all have to be writers themselves, but one or two writers in the group is nice, especially if one of them has editing experience also.  How many readers should you have?  That’s up to you.  I have four whose opinions I value highly.

So now you’re Beta Readers have read the manuscript and pointed out some things that you might have missed in the story: things that were not said, but maybe should have been said; things you assumed readers would understand but that did not come across clearly in the manuscript; things that didn’t sound quite right to your readers; etc.  You take all their comments to heart, decide which ones you need to address and fix some, but you don’t necessarily make all the changes they suggest. Sometimes only one reader will have a problem with something and you have to decide if it is really is a problem or not.  Occasionally, however, there is an item that multiple readers come up with.

That’s what happened to me with TRUE blue, and to be honest, it was a change I was toying with as I wrote the novel, but had decided to leave as I originally envisioned.  Now, though, just days before the edits are due, three bring up this main point and feel the storyline would be stronger if I do this little change, which really isn’t so little as it is interwoven throughout the entire book!

Of course, I’m not going to tell you what it is. 🙂 That might spoil the story for you.  But I had to ask myself before I did any changes to the manuscript, would this main change really make the story stronger?  Would it make a significant enough difference in the character arch to justify the revisions? And, what did my editor think about it?  I sent off an email to my editor. She replied that she really didn’t see a problem, that the story worked just fine the way it was, but yes, changing it would work, also.  It was up to me to decide.  I still needed to meet the deadline, though.

So now what do I do?  Well, I decided to work through all of the edits first while I mulled over the bigger change. Finally, when all the edits were done, I decided that yes, in my heart I knew that what my Beta readers were telling me was true–and, although it would require more work, I also knew that I owed it to myself to put out the best work I possibly could. I made a new manuscript file, figured out the best way to make the change with the least amount of revising, and dove in.

Two days later, the manuscript, complete with all edits addressed and the new changes incorporated, was done–two days before I said I’d have it back to the editor. Yeah!

And yes, I do believe the story is stronger for it.

So, Beta Readers…It takes a lot of courage to put a manuscript out there to your first readers.  But if you want comments, be ready to accept what they give you, and be ready to put the work in if they come up with an item that might require a fairly significant revision. Of course, as a writer, one way to look  it is as just another awesome challenge to get the story just right.

To all my Beta Readers…Love you. Thanks! To my readers, only FIVE MORE WEEKS until TRUE blue’s release.  Until then, I thought I would leave you with this tease…

Sometimes we must revisit the past to embrace our future.

Twenty-four years ago, the murder of a Chicago police officer changed Joey DeLuca’s life.  He lost his best friend and first love, Meghan McConnell, when her mother whisked her out of town.  Now, on the eve of another officer’s death, Meghan is back and about to step into his life again.

There is very little gray in Joey’s line of work as a Lt. Detective–it is either black or white, right or wrong. But Meghan’s insistence on finding answers to her father’s murder threatens those beliefs and throws his marriage to CPD Detective Andi, his career, and the entire DeLuca family in jeopardy when new revelations come to light.

Can Joey save his marriage, solve the murder, and keep his family together all at the same time?

Hi, the independence day Day Blog Hop is over.  And the winner is….Mac! I hope you all enjoyed the hop.  I’ll keep these recipes on for anyone who wants them.

The 4th of July Holiday is upon us, and let’s face it–this summer is hot and steamy—much too hot and steamy to spend time slaving away in the kitchen over some crazy convoluted recipe.  I don’t know about you, but I’d prefer spending time by the pool, or at the beach, reading a sizzling hot summer romance!

But it’s also time for family gatherings and parties.  So, I’ve put together some of my super simple recipes that will wow your guests and still leave you plenty of time and energy to enjoy your company or get through your summer reading list.  Suzi’s Super Simple Wow Recipes are inspired by my trips to Door County, Wisconsin and feature Door County Cherries, but you can substitute any cherry pie filling in them if you like—they just won’t taste quite as tartly sweet and delicious!

Ahh…Door County…very beautiful and inspiring—so much so that I feature the setting in my own new sizzling hot romantic suspense novel, freefall.  (You can click HERE to find out more about freefall and read an excerpt.  I highly suggest it for that poolside or beach read! Buy Links:  MusaPublishing.com ; Amazon.com ; Barnes and Noble.com) 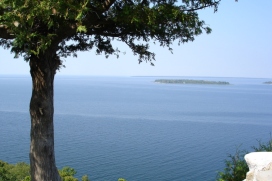 A Tasty Sampler of Some of Door County’s Best!

From the panoramic vistas of Green Bay looking out from the bluffs on the western side of the peninsula, to the quaint little towns and shops hugging the inlets and bays, Door County forms an idyllic yet dramatic backdrop for the intrigue in freefall—as well as a great place to spend a vacation.  My husband and I make it a point to spend at least a few days up there each year, and on our way home, we always stop at one of the roadside farm markets and stock up on pie filling, dried cherries, and many of the other cherry goodies offered.  If you can’t get to Door County, don’t despair!  The good news is, they are available on-line.  The bad news is, this year’s crop is expected to be just 5% of normal, due to the extreme heat in early March, then the following freeze which killed the early blossoms.  So, if you want some of these delicious cherries, you may want to order them now while some of last year’s crop is still available.  I’ve included two of the links at the end of the blog.

Now, onto the recipes—and remember, I said they were super easy! END_OF_DOCUMENT_TOKEN_TO_BE_REPLACED 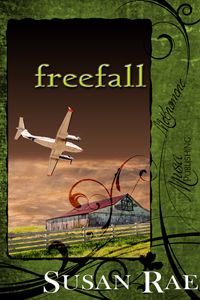 I  am very excited to announce that freefall, my second novel with Musa Publishing, has just been released.  As I write this, I am gazing at the two dozen red roses my husband gave me—not for the release, but for our anniversary. It would seem after all these years, he still likes me!

Yes, I am a romantic at heart, and that’s why I love writing romance novels; but not just any romance novels, novels with gripping stories that give you lots of suspense and intrigue with a good deal of spice mixed in—novels that explore our relationships with family, friends, and lovers.

With that being said, I’d love to introduce you to freefall, the book I always wanted to write. The inspiration came from my END_OF_DOCUMENT_TOKEN_TO_BE_REPLACED