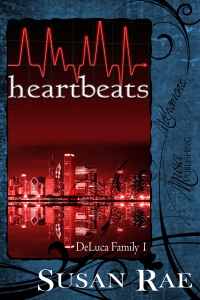 …She recognized him instantly. There was no mistaking the identity of the man who stood in the entrance to the ballroom, nametag in hand, as if he had just arrived. She stood, motionless, staring, unaware of the murmurs of uneasiness arising from the gathering. She watched, mesmerized, as his lips curved into that slow, Mona-Lisa smile of his and his chin lifted in acknowledgment of her awareness of him. Although quite a distance away, Elizabeth could easily make out the slight cleft in his chin, the sexy, firm line of his jaw—and those deep set eyes which she knew were the most amazing shade of midnight blue…

Elizabeth pushed the door open and stepped inside. The glow from the streetlights spilled in through the lace curtains…It caught her eye as it danced eerily with the tree shadows upon the ceiling. Turning her gaze to the right, down the dark hallway, she spotted a sliver of light coming from the bathroom.

…She flicked on the light, aware of the click of the apartment door as it closed behind her…a quick scan of the living room revealed Julie’s evening gown draped across the sofa, the plastic dry-cleaning bag still covering it.

She glanced to the left where Allison’s door stood ajar. Sensing nothing there, she turned toward the hallway, debating whether to continue on or call the police. Now she was really being paranoid… Julie probably just changed her mind about attending the banquet, or—her husband had shown up.

She set her briefcase down, took her cell phone out of her evening bag, just in case, then started down the hallway. At the bathroom, she paused. Glancing around the partially opened door, she discovered Julie’s makeup scattered on the counter along with her own toiletries. A damp towel lay on the floor. She pushed the door open further, but the bathroom was clearly unoccupied.

She took another step toward the bedroom, then stopped as a dark spot on the beige carpet caught her eye. Bending down, she stretched her fingers out to touch it. The familiar texture of the moisture that wicked against her fingertips left her feeling somewhat dazed. She turned her fingers to the light, although her mind already knew what her eyes would tell her. The sticky substance was blood—spent blood—already drying with time.

Drake’s steps faltered. A cold sweat iced his back and he was sure his heart stopped, if only for a second…A muffled shout sounded from inside. “In Here! Hurry!” Elizabeth’s voice? Drake couldn’t tell… Leading with his weapon, he shoved through the door…

“In here!” the woman cried from around the next doorway. This time he was sure it was Elizabeth.

He paused to peer around the corner and scan the room… Finally, he allowed himself to look down toward her voice.

His stomach turned at the ghastly sight that met his eyes.