ICE blue’s Release Day. Yes! And with that, One More Word (okay, more than one) on Insistent Characters.

It’s ICE blue’s release day.  Before I get down to business, I just want to say, in celebration, I’m giving away another ICE blue coffee mug!  Leave a comment at the end of this post and you will automatically be entered into the drawing.  If you’re a writer, please tell us about your most insistent character, the one that wouldn’t let go of you until you wrote their story.  If you’re a wanna be author, tell us about the character that keeps nagging you to get to it.  Or readers, please tell us about your favorite character from your favorite author.  You have until Friday, April 5th to enter.  Good Luck!  For more info on ICE Blue, including the first chapter please click here. 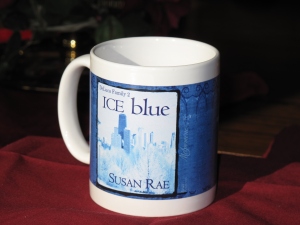 Perfect for curling up with your coffee and your e-reader!

Now, about those insistent characters…  I think it’s safe to say all of us authors have them.  It’s the red haired girl with the freckles who crosses the street and suddenly we’re developing a whole story around her in our head, or the pregnant checker at the grocery store who looks definitely frazzled, or, for romantic suspense writers, the guy in the airport who looks sophisticated and sexy all at the same time, and looks like he’s on a mission.  Or it can be the character who starts to take form when we read a newspaper article and it sparks a story idea and we try to think of the character or characters who will bring the story to life.

Yes, the author can have many characters inhabiting her head at one time.  In most circles, we would be considered not quite right if we told people about them.  But in writer’s circles…  Let me just say, I did a program at the local library recently for young adults and I asked them if they were authors.  Most weren’t sure, but I explained that indeed they were all authors because they had already written a book for the young authors program that all students from their school participated in.  One girl in particular took it even further, though, telling me she had a couple of ideas for some other stories, that the characters were in her head and she just needed to figure out where she was going with them and get them down on paper.  I looked at her and smiled.  Yes, that is an author. I welcomed her into the fold and told her that as an author, I totally understood.

But what happens to all those characters?  Some get sketched out on paper and put away, waiting for the right story to put them into.  Some never make it to the sketching point, but get lost among all the other projects we fill our days with. Some actually make it into the beginning of a novel, perhaps into a first chapter or two, sometimes even one-hundred pages or so until something else pulls our attention away from them, or the story just doesn’t seem to work.

And some just won’t let go, no matter how many other projects we are working on.  They plague us, taunt us, nag us…persistently crying out Write me! Write me! like the puppy wanting to be petted, or the baby needing to be fed.  Okay, now I do sound a little crazy.  But that’s all right, because those are the characters, the insistent ones, that usually have the most to say.  Those are the ones that we have invested the most of ourselves into, the ones who we know will fill the pages of our story with angst and love, hope and despair–all the emotions that make the characters real and make others want to read about them and their stories.

So it was–as I mentioned in my previous post–with my characters in ICE blue.  Angela and Troy kept nagging me to just get on with it!  So yes, their release day is here and at last I am free of them :-). Well, perhaps not completely free.  They do return in TRUE blue, but that is more Andi and Joey DeLucas’ story.  And oh my gosh, still not free am I!  Now THEY are nagging me to just get on with it.  It never ends!

So please leave a comment below telling us about your insistent character, or your favorite character and again, good luck with the drawing!

4 thoughts on “ICE blue’s Release Day. Yes! And with that, One More Word (okay, more than one) on Insistent Characters.”